After more than 26 months of hard work, we are finally moving furniture back into the basement. That’s a major challenge all on its own. How’s everything going to fit? It will take another few more weeks to find out because we have a ton of stuff to move. What happened in the last few months? I installed over 100 feet of baseboards. During that process, I learned how to create coping joints in the inside corners of the baseboards with a miter saw, i.e. no coping saw required. It’s not difficult but it is definitely scary holding the baseboards and sticking my face super close to the miter saw. I am very thankful that I still have all ten fingers after getting intimate with power tools. Once the baseboard challenge was mostly conquered, I turned my attention to the countertop in the study.

Getting my hands dirty with Ardex feather finish 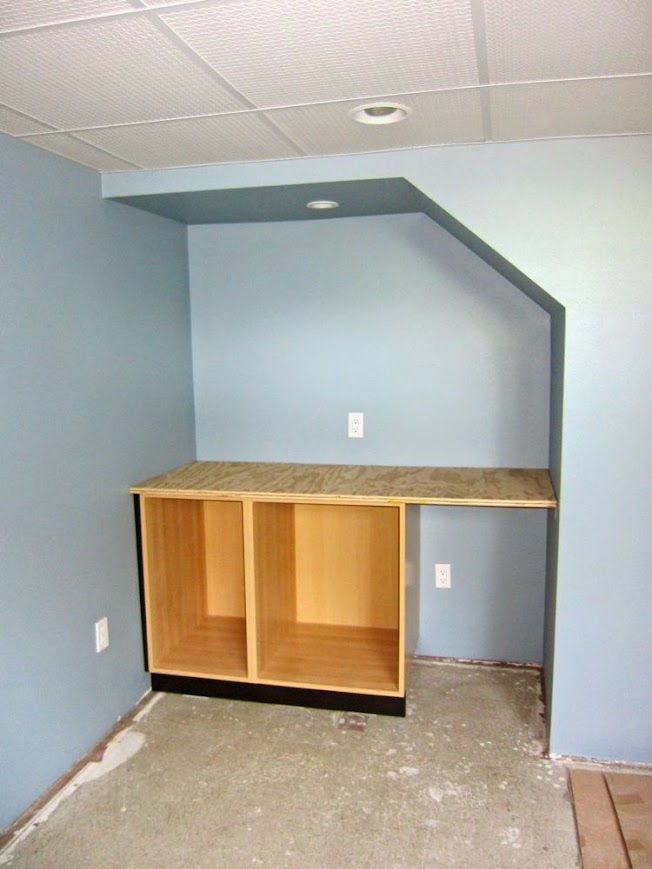 We have a space under the stair landing that I had planned for IKEA kitchen cabinets and an undercounter freezer. The cabinets are something we are familiar with from the kitchen renovation. The countertop is another story. IKEA sells super affordable Formica countertops. Most people don’t like Formica in the kitchen but for the basement, the price is right for me. We measured the length of the three-sided enclosed space, cut the countertop and then realized there is no way a solid countertop will fit because the walls are not square and not straight either! It is kind of a parallelogram with a convex back wall. How did I figure that out? We used some scrap pieces of quarter inch plywood and hot glue to make a template similar to how the pros template for solid countertops. I spent months researching for plan B after installing some plywood in sections as the underlayment. The main criteria is that there will be no backsplash around the countertop. I hate the look of short backsplash around countertops. I want drywall meets countertop and that’s it. Tiles seem to be the way to go but I don’t want grout lines on a counter. I even considered epoxy countertop until I read about the step of using a blow torch to pop bubbles in the freshly poured epoxy. Wielding a blow torch near drywall doesn’t sound right to me.

I ended up getting the idea from This Old House magazine. Although I am a long time subscriber and my DIY bugs are definitely originated from the TV show and the publication, I have never tried any ideas from the magazine. The annual reader-created issue contains a money-saving tip of renewing Formica countertop with concrete feather finish. I jumped right on it and read a bunch of blog posts. Many people have tried this. The abundance of shared experiences is great until I tried to figure out the proper ratio of concrete and water. The printed instructions on the package of Ardex Feather Finish said to use a 2 (concrete) to 1 (water) ratio. I did a test run on a piece of scrap wood using a 1:1 ratio and that seemed to be alright. Most of the blog posts I read didn’t provide any advice in numbers. They explained the mix in terms of consistency: peanut butter, thick gravy, thin pancake batter, toothpaste. The engineer in me wanted some “concrete” numbers so I figured it out myself. The 1:1 ratio was mostly what I did using two plastic tubs and a cup (they are placed on top of the finished countertop in the photo below). Each coat I applied consisted of 2 tubs of Ardex and 2+ tubs of water (the + is the extra water that equaled to the amount of powder pigment I added to the mix).

Figuring out the concrete and water ratio is only half the battle. The powder pigment is where the mad scientist skills are required. I started out using about 1/5 of a “cup” (see photo above) but the color was too light. I was aiming for dark brown and hoping to match the black brown IKEA cabinet doors. In the third coat, I put in a full “cup” but it still didn’t look dark enough. I ended up getting a bottle of liquid cement color from Home Depot to add a bunch of black into the mix. The fourth / final coat looked good prior to sanding. For some reason, sanding lightened the color and made the whole thing blotchy. I read about painting the pigment onto concrete from one of the liquid color reviews on Home Depot website so I decided to do exactly that mixing up the remaining umber powder pigment with the liquid color and some water. 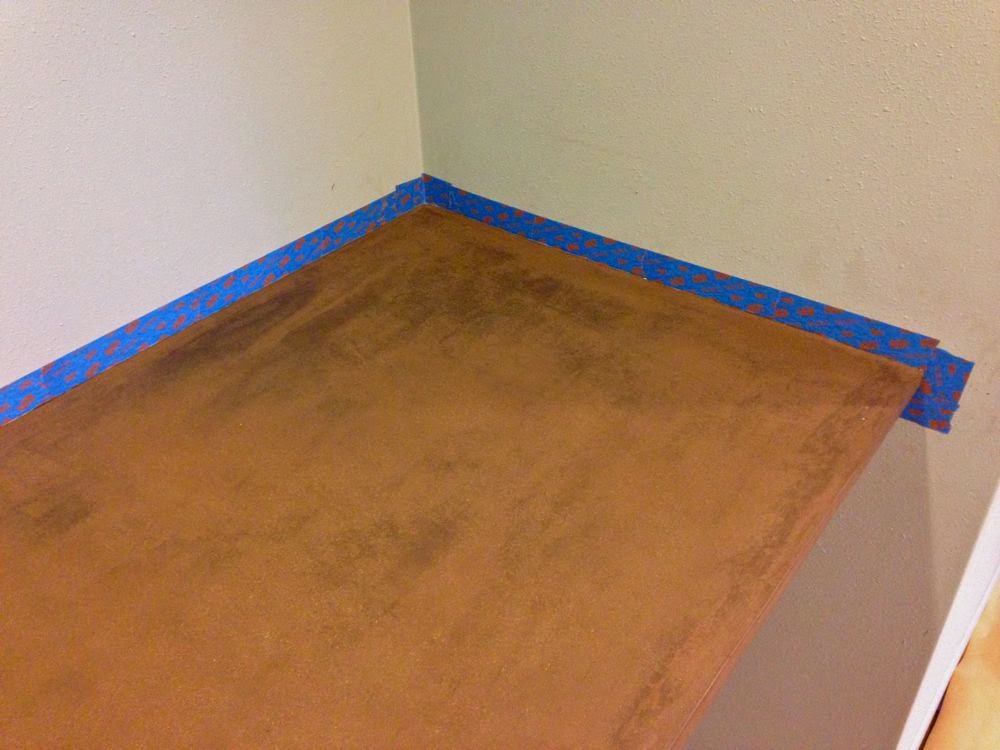 The paint-on finish left a bunch of brown powder on the surface after everything was dried. My guess is that the powder pigment doesn’t really work this way. Regardless, the whole countertop looked more consistent throughout. 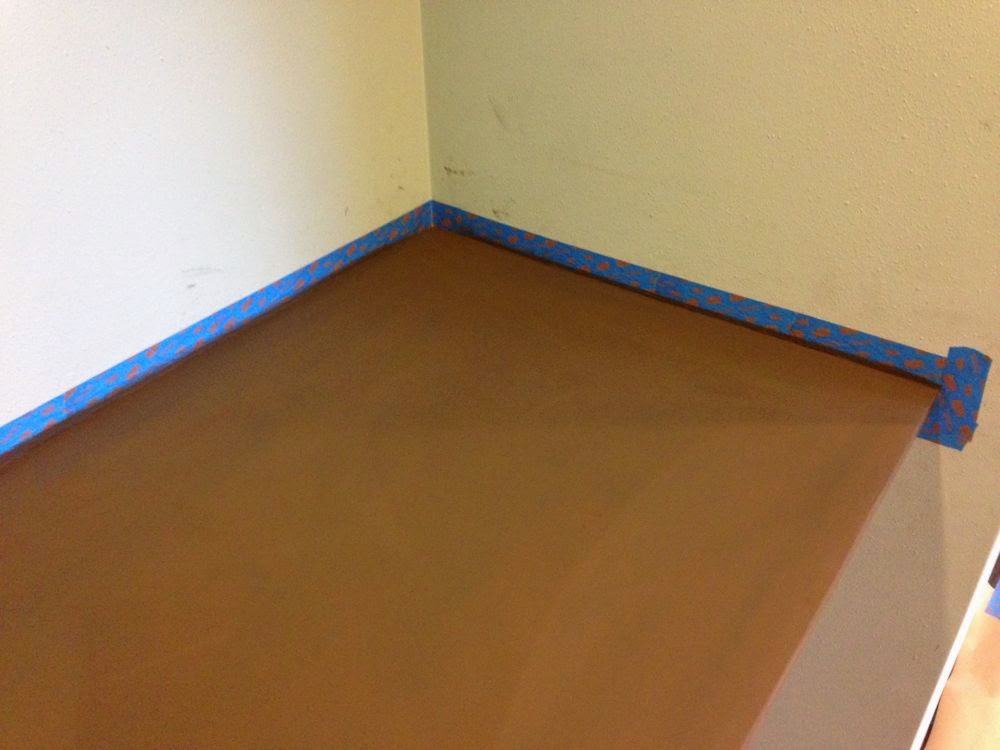 After applying a mix of powder pigment, liquid color and water

I cleaned up all the powder as much as I could and proceeded to apply the 511 Impregnator Sealer following this blog post about sealing the Ardex. I applied two coats of Impregnator with 24 hours in between and waited another 48 hours before starting the one-coat a day journey of Safecoat Acrylacq. My first coat of Acrylacq was too thin. The brush strokes were super visible. When I changed out the blue tape from the walls, I dropped a piece of tape onto the counter and lifted off a small chunk of the Acrylacq. Crap! That spot looks like a little birth mark even after I applied 5 more coats. Oh well, it is what it is. I got to move on. Touch up paint on the walls awaits.

I carefully cut along the edges of the blue tape where the wall meets the counter to release all the layers of Acrylacq from the tape because I couldn’t remove the tape without introducing dust to the surface while the Acrylacq was still wet. All that tedious work was not enough to prevent lifting some Acrylacq from the counter. Clear caulk along all the edges “sealed the deal”. After the caulk was dried, I painted over all the walls surrounding the counter. The edges of the wall close to the countertop were splattered with Ardex (tape was not recommended by numerous bloggers when applying Ardex). I cut in all the edges freehand without taping the counter because I was worried the tape would lift off the Acrylacq like the first coat. I am glad this was not my first time cutting in edges with a brush. It’s only the second time though. I leaned my forearm against the walls as much as possible to keep my hand steady with half of my body and my head on the counter so I could see the edges straight on. In the end, the entire countertop is not perfect but I couldn’t be happier with it especially how well the finished color matches the IKEA black brown cabinet doors.

Things I wish I knew before I started

If you want to try this, I have a few other observations you might not find in other blog posts:

It took two weeks from start to finish. The cost is well within reach for most DIYers (I spent about $100 total on materials and sand paper). I am not sure I would do it in a kitchen like most others did. In the basement, I don’t mind the imperfections.

The final frontier is moving stuff back in like I mentioned at the beginning of this blog post. I am crossing fingers we will truly be done by Chinese New Year!