Several months have gone by since my last post. We are at the stages of finish work and it feels like this will take longer than the rough-in. Partly because this is when decisions have to be made for everything visible. We sampled 6-8 paint colors before deciding on two of them. Other finishes are decided by looking at internet photos which often give me much anxiety. What if I don’t like the items when I finally see them in person? Returning internet orders incurs shipping costs but not so for the ship-to-store option like Home Depot as long as it’s not a special order item. Otherwise, I clicked the button to say “buy” and crossed my fingers that everything will work out.

One of such internet adventures was the ceiling grid and tiles for the family room and office space. We had contractors drywalled the ceiling in the bathroom but I want to keep the rest to be accessible for future upgrade of electrical or plumbing repair (a frozen spigot has already given us an important life lesson back in January). Traditional drop ceiling does not work well for the low ceiling height in basements so I did a lot of research on alternatives and decided on CeilingLink. This PVC product comes in a few different shapes to accommodate the room perimeter, stairway openings, and other box-arounds.

The installation of CeilingLink sounds simple based on what I read online. The hardest part is figuring out the exact location of the grid while making sure none of the ceiling channels will run into recessed lights and other electrical boxes. It’s a huge amount of math with fractions because the channels are to be spaced 24-1/8″ apart. Thank the power that be for the Handyman Calculator app! I can generally handle simple fractions by hand but repeating the process for over 25 electrical items against the ceiling channels for two rooms over 12 feet wide can easily turn into madness. Surprisingly, I figured things out fairly quickly for the office space that has 7 recessed lights, a heating panel, and two electrical boxes. There seems to be only one solution that would not require relocating any electrical. 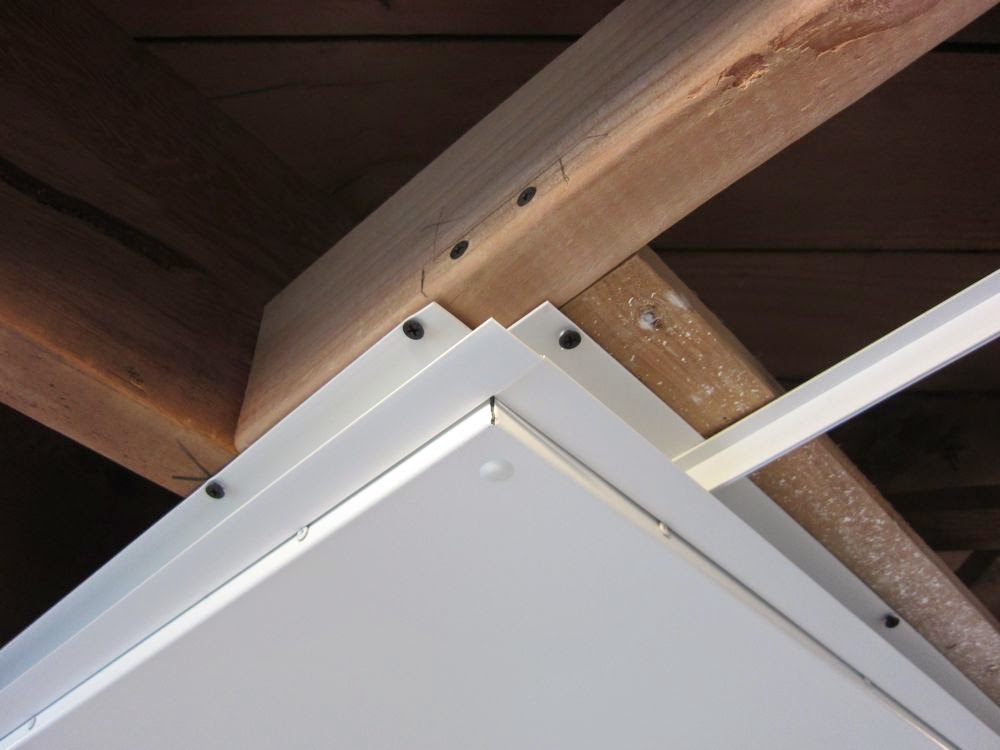 Before jumping right in, we had to add blocking around the heating panel as a box-around. Although our carpentry skills are not great, the blocking went in much easier than I thought. After that, we started installing ceiling channels from the perimeter and then worked inward from one side of the room to the other. One lesson we learned early is to pre-punch holes in the channels instead of letting the screws do the hard work. Otherwise, a slip from the screw would lead to an indent on the freshly painted drywall! Since that minor incident, we’ve scratched up the walls a few more times so my mind is set to do touchup paint sometime down the road.

Once the ceiling channels were done, installing the ceiling panels was next. I opted for another PVC product for the panels after a lot of research. I purchased just enough to cover the office space, not knowing if I want to use the same style for the family room. The main advantage of PVC panels is waterproof. The office space is directly under the kitchen and an outdoor spigot. I think you can never be too cautious about closing up access to that much plumbing.

Another advantage of PVC is that the panels are relatively sturdy. They don’t break apart easily like traditional mineral fiber ceiling tiles which I heard you have to include 10% breakage when ordering. With all the good, there is still some bad from the quality control of manufacturing. We found quite a bunch of scratches, small lumps, and stains. We kept a reject pile as we moved along with the installation. 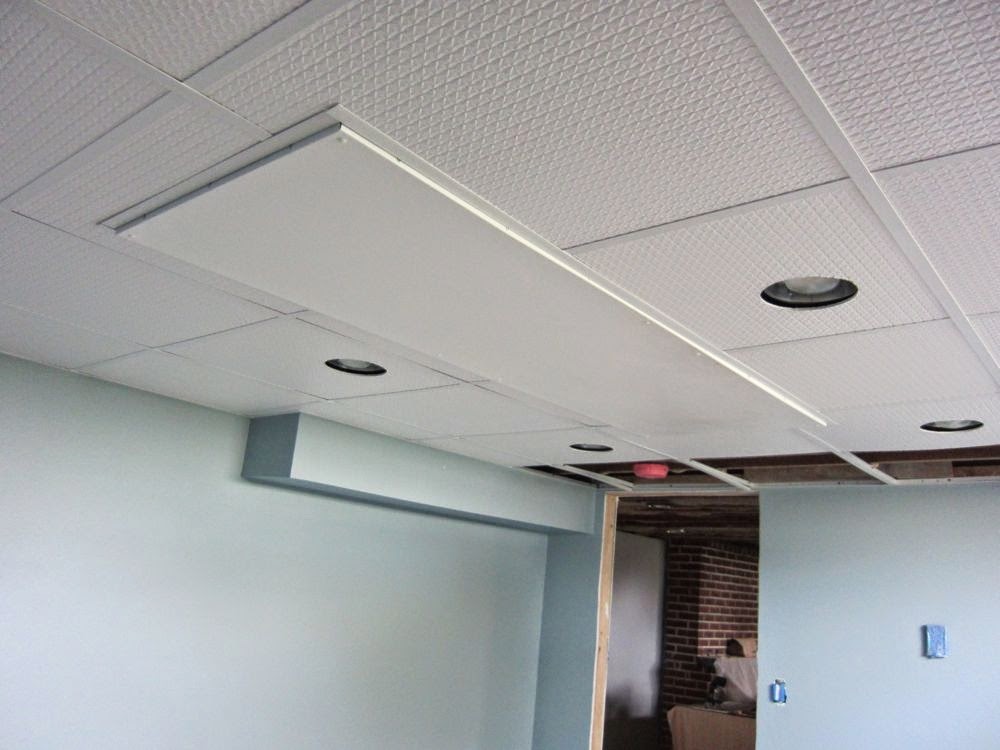 Cutting the panels was easy with a utility knife. On the other hand, cutting out holes for the recessed lights was a bit of an operation. Luckily, I have a RotoZip with a circle cutter. I bought this tool many years ago but I don’t use it often. After cutting out perfect holes for over 20 recessed lights, the investment for this tool has completely paid off.

The success of one room gave us some confidence to handle the much larger and trickier family room. The crazy math work for the grid didn’t yield an easy solution. All the potential outcomes involve relocating at least two or more electrical items. The solution I picked initially involved relocating one recessed light and the smoke detector. In the end, we had to also relocate two speaker boxes and change a recessed light to a surface mount. It’s definitely more work than we bargained for.

In term of the panels, I ended up ordering the same style as the office space. I would much prefer to have a more classic and sculptural ceiling panel similar to a tin ceiling in the family room. However, none of the recessed lights would end up dead center in a panel so I don’t think the classic look would work out well. There is also the issue with cost. The nicer panels cost a lot more. I figure if I get tired of the panels I pick now, I can buy new ones and replace everything in the future (not likely, considering how much work it took to install them).

I didn’t keep tabs on when we started and finished the ceiling. It just took many weekends. The end result is quite nice. It does not look like a commercial office ceiling that I am used to see everyday at work. It’s not super old school or modern either. Well, you can look at the photos and tell me what you think. 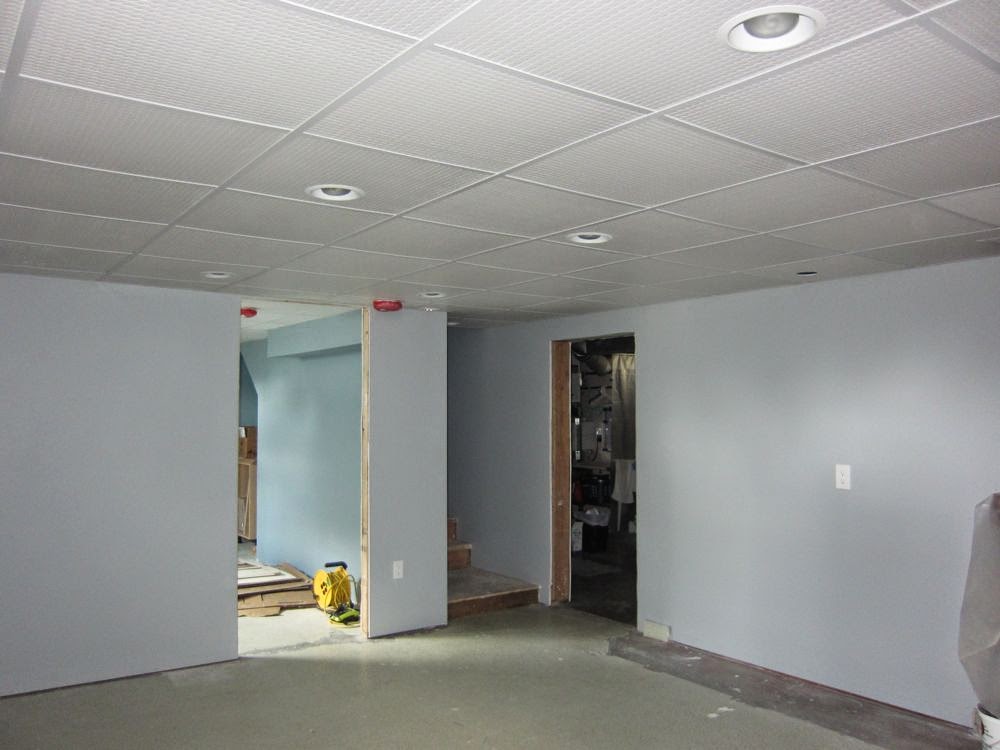 The second bath came into shape

While the ceiling installation was in progress, we hired out for tiling the bathroom. I picked standard 4″X4″ white tiles and small glass tiles for the walls and two different colors of porcelain mosaic tiles for the shower floor and bathroom room floor. I went with a blue and white theme because I’ve been waiting for an opportunity to use a large amount of blue tiles in a bathroom. If the basement bathroom is larger, I would like to use it on the walls but for a tiny bath, I decided to use mostly white tiles on the wall and keep the large area of blue on the floor. 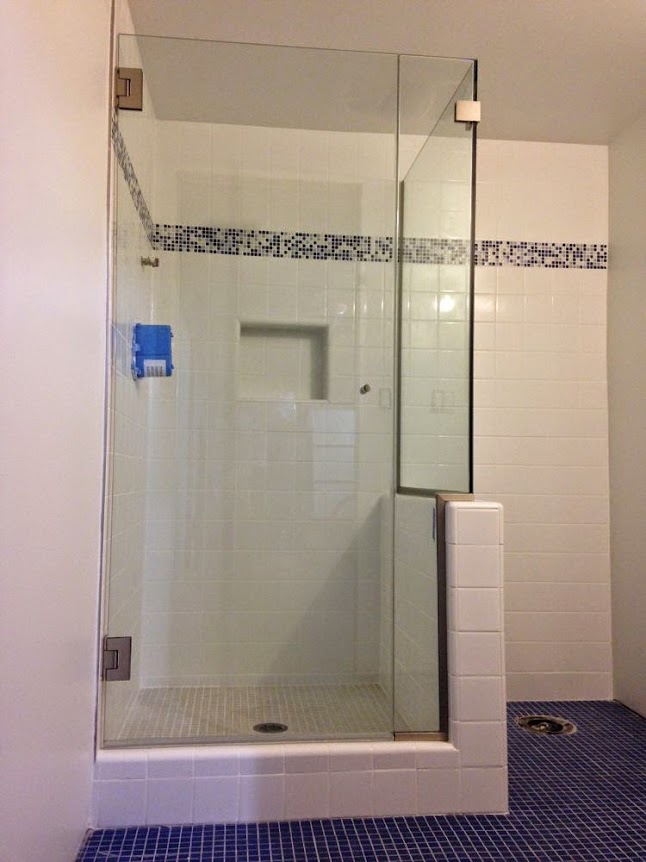 The contractor did an okay job. some of the mosaic tiles and glass tiles were not flush. I asked him to fix several glass tiles that stick out in an area where the shower doors would be located. A week after the tile installation was complete, cracks showed up on the round out-corner tiles of the knee wall. We didn’t touch anything in the bathroom since the contractor left because we were busy with the ceiling. None of us can figure out why the tiles cracked. Luckily, I had originally ordered four of those tiles  just in case something happened. The contractor replaced the cracked pieces with new ones. Once the tiles were finally complete, I ordered a set of frameless shower doors. The glass company estimator and installer did an amazing job considering the walls are not plumb. 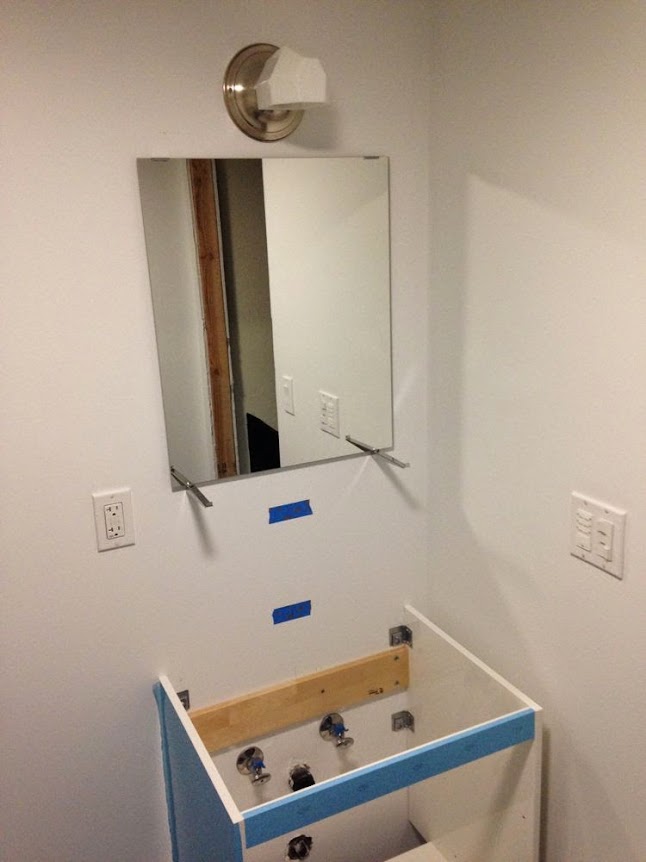 Next up is bathroom fixtures. Earlier this week, I had the plumber who did the rough-in work to come back for the toilet install. I was a little nervous about whether the toilet would fit. The extra layers of insulation requires me to purchase a 10″ rough-in. I would not have known such a toilet exists if the plumber didn’t tell me about it last fall. The installation turned out to be uneventful.

Yesterday, I worked on installing the mirror and sink cabinet – both were purchased from IKEA. I had studied the dimensions of various IKEA bathroom offerings before making a final decision. I am only halfway through the install and I am happy with the result so far. 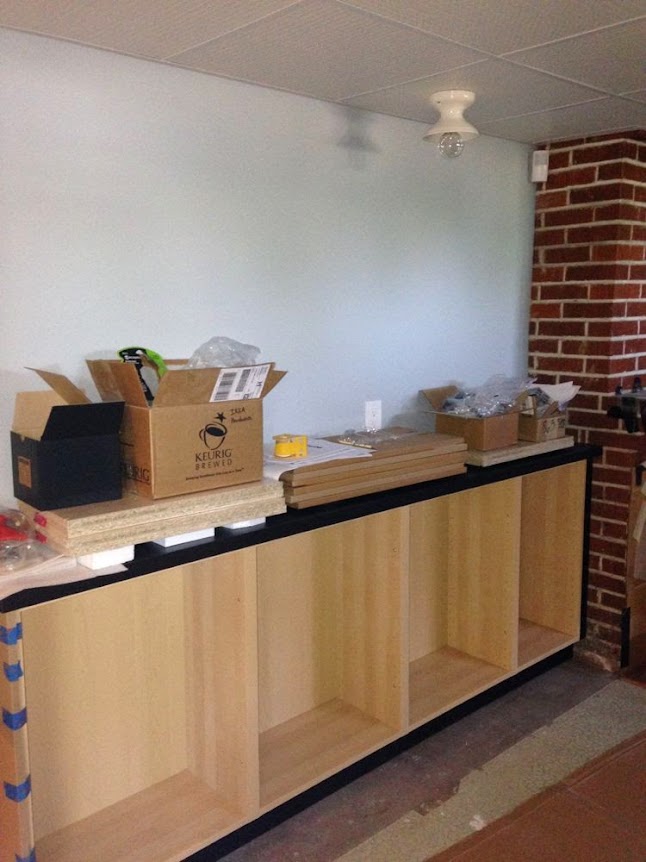 IKEA shopping is a combo experience of internet research and in-store study which is less stressful than purchasing something entirely online. In terms of lighting, I must look at the fixtures in person to make decisions. Back in early July, I took a vacation day from work to do just that. I spent hours at Schoolhouse Electric to pick out the fixture and shade for the bathroom and a surface mount in the family room. Big kudos to the salesperson who helped me out by switching out many shades and light bulbs to give me the visual experience I need. You can see from the photo above for what I picked for the bathroom. As for the family room, I went with something unusual in the form of a medium size Alabax and an Edison bulb. This surface mount was not in the original plan until the ceiling install forced us to give up a recessed light and the location is directly above a row of IKEA cabinets. It didn’t look right without any light in this area. After the install, I am actually glad to have a change of plans to add something unique to the basement.

In addition to the nice fixtures from Schoolhouse Electric, we also installed two less expensive fixtures at the top of the stairs leading to the basement. Taking care of all four lights was not a complete smooth ride but the end result was good enough to pass a final electrical inspection along with a final mechanical inspection for the bathroom exhaust. I was so relieved we passed because my permit is about to run out on its 180-day limit. I now have another 180 days to complete the rest of the finish work.