Hubby and I tore out the basement last fall after having to investigate a potential electrical problem with our stove. Two electricians’ visits later, we didn’t get any answers so we cut a bunch of holes in the ceiling of the study in the basement which is directly below the kitchen. We found a hidden junction box for the stove and the wiring connections didn’t look safe. We called back one of the electricians to take care of it.

Since we’ve already cut a bunch of holes in the ceiling, the next progression seemed to be a complete demolition. We filled up a 10-yard dumpster and there is still a bunch of crap leftover. Next up was a seismic upgrade and an egress window. The actual work didn’t start until late January after spending weeks figuring out a solution with the contractor for an egress window to go into an existing window opening. It ended up to be a T-shape design – a long fixed window at the top where two little windows used to be and a casement window at the bottom. 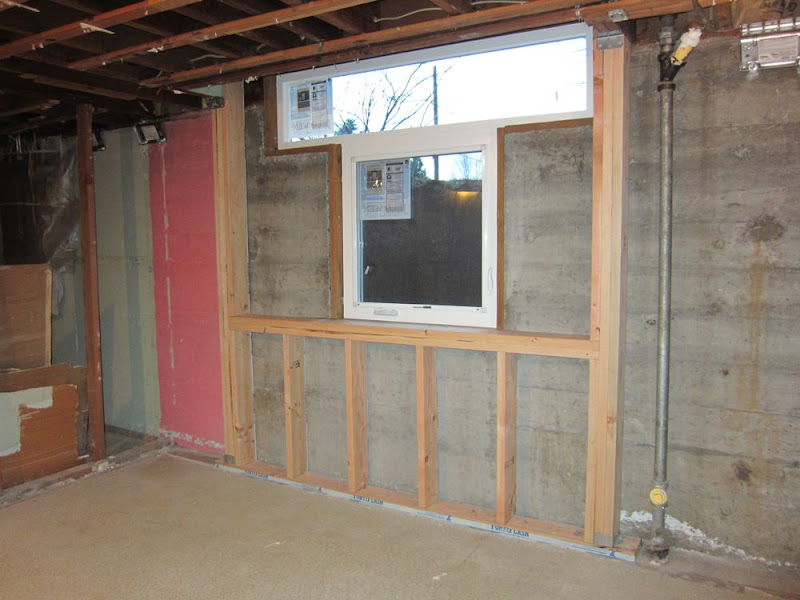 After the window installation, we waited several weeks for the contractor to install the window well. The window manufacturer increased the size of the casement window to meet code for egress but the contractor has already ordered the window well at that point. A larger well had to be ordered. Spring rain is no fun when a window is facing a giant hole of dirt. I came up with several kinds of set up with plastic sheets, duct tape, rocks and a wood frame to battle the rain. It’s not pretty for the neighbors to see but who cares.

My current task is filling holes on the concrete walls. We attempted to remove concrete nails which were used to hold furring strips and took out chunks of concrete with the nails. That means more work before insulating the walls with foam panels. Sigh…