The one year mark came and gone but we at least got started cooking in the new kitchen. It took quite a bit of elbow grease to get here.

In the last blog post, I mentioned I scratched the sink while I drilled a hole for the Instant Hot. The rescue, Scratch-B-Gone Stainless Steel Scratch Repair Kit arrived quickly from Amazon. The kit is easy to use but for deep gouges, it requires some time and hard work to sand them out. We took quite a bit material off the sink. I can feel a dip in the stainless steel with my finger but it is not visible.

Next up were Instant Hot and faucet. They went in without a hitch. Dropping the sink into the countertop was the scary part. We did a dry run first. Then, instead of pulling the whole thing out, we stacked up the sink from the cabinet underneath, applied Silicone caulk and went for it. I had blue tape around the countertop cutout that helped us center the sink. We made a small adjustment, tightened up the sink clips and that was it. Most of the house has oak hardwood floor while the old kitchen had layers of vinyl. The new kitchen floor is marmoleum. There used to be a worn out piece of trim covering the transition from wood to vinyl. Underneath the old trim is an ugly patch of hardwood floor with nails and screws sticking out plus old caulking gunk. We had a carpenter came over a few months ago to install trims around the two entryways and he also installed a new trim that day. Unfortunately, the new trim was too thick. It’s 1/2″ thick and 5″ wide. When I walked on it, I could feel it pushing hard on my feet.

A while after the sink installation, I was home alone one weekend. I thought I would tackle the trim. I found a new piece that is 3/8″ thick and 3″ wide. The smaller width barely covers the ugly patch which is uneven everywhere. I used the Dremel Multi-Max to sand the area smooth and I also had to remove a few screws and pound in several nails along the way.

After all that detail work, I cut the new trim to length and drilled holes for nails. I put down some caulking under the trim and took a break for some food. It’s a scary thought to be pounding nails because I am really bad at it. Both of us would bend the nails most of the time. I bought a Ryobi Auto Hammer a few months ago hoping it would help. Unfortunately, it bent the nails just the same. I probably didn’t use it right. I couldn’t pull the nails out so I ended up pulling out the trim, again.

I made a quick trip to Home Depot and found trim number #3. It’s made out of oak with pre-drilled holes for screws (provided). It probably would look better matching the old hardwood floor after a few coats of polyurethane. After I cut it to size and shaved down a little bit of wood for better countersink, I ran out of time. The big lesson learned is that finish work can’t be rushed so I have to put this aside for later.

Let there be light!

For months, we had only one light working in the new space and it’s a new recessed light above the range area. It was tough going during the winter months when it got dark early and we couldn’t see well. We finally got around to pick out one of the two light fixtures in January. That took us a few trips back and forth to the store. The drywall opening was cut fairly close to size with the electrical box but we still had to look for a fixture large enough to cover up. By early February, we got it done. The fixture is in the middle of the room. It was a major improvement to the lighting situation. 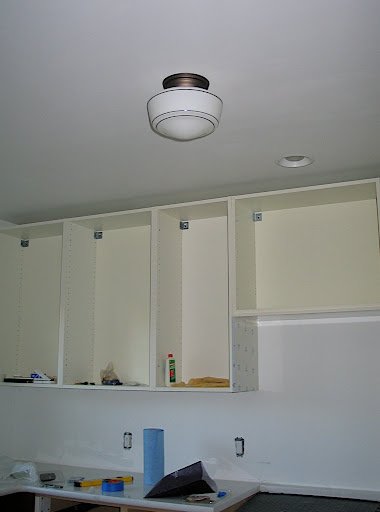 We have one more fixture to pick out for the area above the sink. We really want to have a pendant fixture. The downside is most of the pendants are not big enough to cover our drywall opening. We looked around for a ceiling medallion and found a simple one at Lowe’s. After a few cuts to fit around the electrical box, we applied the same paint as the walls and ceiling on the medallion. 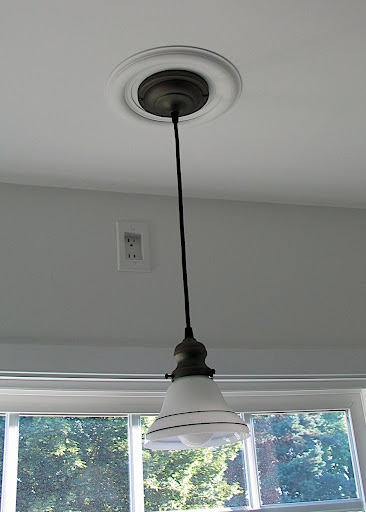 We delayed installing the pendant light until after the sink went in. By the time we got around to it, we still faced a few difficulties. A little bit of this and a little bit of that later, it was in. It hangs 3 feet above the countertop per the advice of the store clerk. It brightens up the room a lot although it has a lower wattage compact florescent light bulb than the other fixtures.

Got to have ice

It was raining and often cold all through June. The weather was finally warming up by early July and it was forecast to hit the upper 90’s. Getting the fridge hooked up for the ice maker became a priority. During my countless hours of research, I came cross a device called FloodStop. It is installed at the water shut off plus a water sensor to communicate a leak. It is available for dishwasher, washing machine, water heater and ice maker. I thought it would be a good idea to install the ice maker version since the water shut off valve is hard to reach behind the fridge.

Adding to the complexity is a water filter. The fridge does not have a filter built in. Although we have new PEX pipes, the water coming from the city pipes is still rusty (I have a constant battle against red stain around the bathroom sink). My grand idea is to install the filter plus all the plastic tubes and wiring in the cabinet next to the fridge.

We started building this contraption by drilling a hole to the side of the cabinet. Then we pulled plastic tubes and wiring through. The FloodStop system has three components: Motorized Ball Valve, Control Unit, and Water/Leak Sensor plus an AC power adaptor. I bought an additional leak sensor so there is one on the floor behind the fridge and the other inside the cabinet below the water filter. The FloodStop motorized ball valve is connected to the water shutoff through a compression fitting which was fairly easy to install. The next part about connecting the plastic tube to the ball valve’s compression fitting was a mystery to us until we visited the local hardware store twice to get the right parts (compression nut, ferrule, and a brass reinforcement insert) and advice.

When we thought we were done threading tubes and wires through the cabinet and hooking up the plumbing between the FloodStop components, water filter and the fridge, we started pushing the fridge back. That’s when a new problem came up. The motorized ball valve and tubing kept us from pushing the fridge close against the wall. I thought may be we can get a compression fitting in a 90 degree elbow but no such luck. We ended up adding a 1-ft braided stainless steel supply line to set the ball valve away from the shut off and attaching the valve to the wall with a sticky pad. It’s not pretty but it works. And we started to make ice just in time for the hot weather.

The sink is open for business

After the sink was installed, I couldn’t get my head wrapped around how to plumb everything underneath for a long time. I thought this is the part where we need to hire a professional. But I made the plunge to do it myself. It wasn’t too bad after spending several days to fix leaks.

This part was as complicated as hooking up the ice maker. The simple story is this:

My initial plan included a garbage disposal. Our contractor said we have 1-1/2″ drain pipes which are not big enough for a disposal (it requires 2″ pipes). We didn’t have a disposal before and we don’t see the need for it. It ended up to be a good decision to exclude it, otherwise, we would have no room under the sink for storage.

It was a full weekend event to pull this off. On the first day, I went to Home Depot to get parts for the drain pipes. I was concerned that the drain outlet at the wall doesn’t line up directly with the sink drain. I was glad to learn at Home Depot that the P-trap allows a bit of wiggle room. Once I got all the parts, I spent most of the rest of the day cutting the various pieces of pipes to length. The day was ended with positioning screws in the cabinet to hang the Instant Hot and water filter.

Day 2 was a tough one. All the water inlet pipes and tubes seemed to be fairly easy to connect. The drain pipes were quite simple, too. When I turned on the water, that’s when disaster struck. I didn’t tighten the filter unit good enough (the instructions said “Don’t over-tighten”) and water gushed out like mad. It was an easy fix. The next leak was where the plastic tubing got connected to the water filter. I kept disconnecting and reconnecting it. I even went to the neighborhood hardware store to get new tubing. Nothing worked until I found out one of the rubber O-ring was out of alignment. The O-ring is tiny. I had to use a toothpick and a wooden skewer to surgically put it back in place. I was completely drained with sweat from the heat when this ordeal was over. And the fun is yet to come. Over the next few days, we started to wash dishes and use the dishwasher. I discovered leaks in the drain pipes. A few more tweaks later, plumbing was finally complete. And hubby considered me to be the in-house plumber since I did all of it by myself. 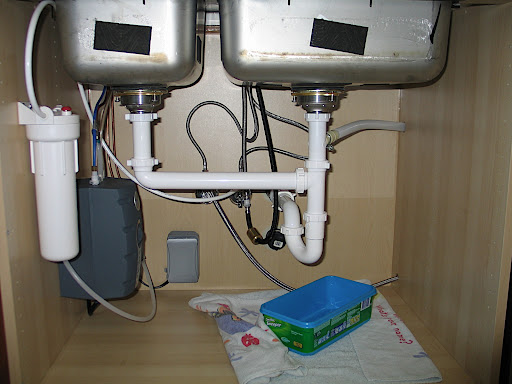 The finish line is near

Once all the plumbing work was done, we were able to finish installing cabinet doors. Toekicks are next but they have their own set of challenges. The microwave cabinet was finally complete and all the appliances are in the same room together. Trim #3 hopefully will be it. The next post should wrap up this project.