It’s been almost two months since I dropped a few words here about the renovation. It’s moving along slowly but other things in life pick up speed. Before then, my body set off an alarm to tell me to rest.

When your body betrayed you

Back in February, I woke up one day with a severe case of muscle spasm in the neck and right shoulder. I had this problem before but I was usually out of bed before noticing the problem. This time around, I opened my eyes from a full night of sleep and I immediately noticed I could not move. Any slight movement was painful. I could hear hubby cooking breakfast in the temporary kitchen we set up in the bedroom next door but I couldn’t yell loud enough to get his attention right away. When the cooking noise subsided, I called out to him and finally got the help I needed. It’s still not easy to get out of bed.

I have three professionals I usually call to fix this problem: an acupuncturist, a Shiatsu massage therapist and a chiropractor. I called all three after breakfast. The massage therapist called back first and I went to see her later that day. The chiropractor’s earliest opening in her schedule was the following day. Since I could barely move, I stayed home from work for 2 days. After 2 massage appointments and 2 chiropractic appointments, I started to get back some flexibility. A bunch more visits with the chiropractor later, I felt human again.

A coworker often has tight muscles in the same area as me along her back and her masseuse called that area the “mouse muscles” – the muscles that are engaged when we use the computer mouse. After reading online about bad locations for computer mouse, I concluded the “mouse muscles” is the right diagnosis. Most keyboard trays position the mouse next to the keyboard’s number pad. Apparently, that position keeps my right arm in an outstretched position all day. The most ergonomic location for the mouse is above the number pad. While I wait for a new keyboard tray at work, I am using the mouse on my lap for the time being.

It took us four consecutive Saturdays to visit tile stores to decide on our backsplash and it took another week and a half for the tiles to arrive. We spent a weekend to put sealant on the decorative tiles and lay out the pattern. Our tile guy (his relative) came over a few days later to install. The clear/white glass tiles turned out to be a bit gray after they got grouted. I guess the grout blocks a lot of the light entering the glass so the tiles by themselves look a lot lighter. 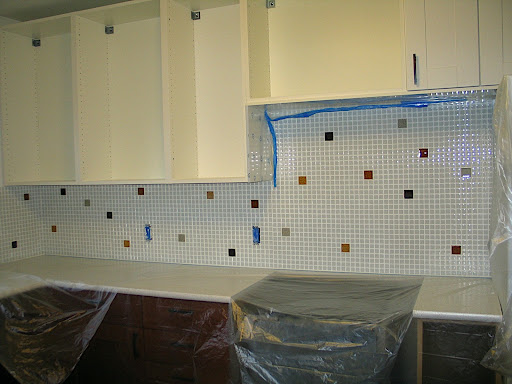 The outcome is not what I pictured in my head. I think I will probably grow into liking it. The strange thing is I almost never paid attention to the laminate backsplash in the old kitchen. It was the same material as the countertop. I guess everything blended in. I wonder if it would be the same with the tile backsplash. Hope not.

Hubby continues to attend Search and Rescue trainings and he has overnight outings one weekend a month. Although he is not yet certified, he is allowed to go out on searches. He got called several times and didn’t go out to the earlier calls. He went to a few lately but the searches were called off by the time he and his team were ready. Today, he went out to a search for real. He got called in the middle of the night. Before he left the house, he woke me gently to let me know he was heading out. By the time I got to work, the search was “breaking news” – a missing hiker. A few hours later, the hiker was found although not by his team.

The warm weather often means more searches and it is also triathlon training season. Hubby has participated in several duathlons in the past. This year, he decided to go for the triathlon. Aside from training, he has to go to couple of races to tune up before the big race in June. Earlier this month, he ran a 15k race and I went to the race to be the “gear bag carrier”. After the race, I was so tired that I stayed in bed the rest of the Sunday afternoon. Another day lost for the kitchen remodel, oh well.

Before the countertop was put in, we installed all the cabinet frames. We are slowly installing the doors and drawers. The cabinet door handles took us a while to decide. We couldn’t agree on any handles offered at IKEA. I ended up checking out the website of the brand of handles carried by Home Depot and Lowes and looked through their catalog. I picked one that is reasonably priced, bought two locally at Lowes and then ordered the rest from Amazon. 36 handles total for all the doors and drawers and we have to drill two holes for each handle. We are half way there and we’ve only made one minor mistake (a washer came to the rescue).

Meanwhile, the appliances are screaming at us to get hooked up and installed at their final locations. Don’t worry, we will get to you (dishwasher, range, fridge, instant hot and sink) some day.

One thought on “Kitchen renovation, part 5”