It’s been 3 weeks since hubby and I started renovating our kitchen. It’s progressing faster than I thought. I don’t have any expectation on the schedule which happens to be almost everyone’s question. In my opinion, if you have an expectation on when a major home renovation will be done, you will only be disappointed. My high hope is we don’t go over the budget too much.

Demolition took more than 2 days. We got the built-in cabinets and the plaster/drywall combo walls and ceiling taken out in a weekend. We were puzzled by the multi-layered flooring. A relative suggested cutting everything up using a circular saw setting at a height just above the subfloor. We were a little worried that there might be asbestos in one of those layers. I asked the contractor who we hired to do plumbing and electrical work. He thought we should be safe but recommended against using power tools. When I told hubby about it, he decided he would remove the floor by prying from the bottom layer of tongue and groove flooring. It worked really well. Saved us time from pulling the the top 2 layers of old vinyl which were really hard to take out. Besides, the tongue and groove flooring could not be saved. There was a layer of tar-like adhesive under the vinyl and the black stuff was not budging using hand tools. 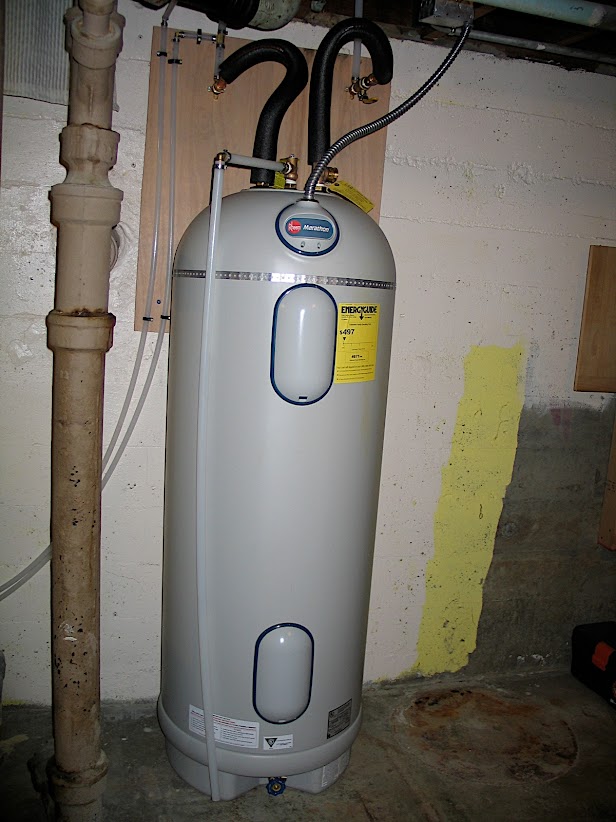 After the demo, the contractor took over for about a week. They replaced all our iron water pipes with PEX, replaced the old hot water heater with a Marathon Water Heater, added new circuits for the kitchen outlets and appliances. They did everything in a week when it was over 100 degrees. It was well worth the money. When I saw the new hot water heater for the first time, I was impressed although I’ve seen pictures of it online. It’s so much nicer than the traditional metal tank kind. It’s supposed to be super energy efficient, too.

Next up is insulation. There was absolutely nothing between the studs when we opened up the walls. We were not surprised due to the age of the house (1947). We don’t use a lot of oil during the winter however. The house has its old siding plus a layer of foam and vinyl siding. We are guessing the multi-layered siding helps. Still, adding insulation is always a good thing. We decided to install UltraTouch Cotton insulation which is made of recycled denim and cotton. This is very easy to install. Not that fiberglass insulation is hard to install. The major upside of the cotton insulation is that it won’t irritate the skin so we didn’t have to wear long sleeve shirts. It was a blessing to wear short sleeve on the days when it was over 90 degrees. Dust mask and eye protection were still needed. The cotton fiber were all over the place. I was picking blue fiber out of my eyes the day after we finished.

There is one downside of the cotton insulation. It is not faced batt. The kraft paper of the fiberglass insulation can be considered as the moisture barrier depending on local codes. We stapled a sheet of 6 mil polyethylene on the studs as moisture barrier. I also bought a vapor barrier primer to paint onto the drywall later.

We are now at the drywall phase. We have never done drywall (not that we’ve done demo, insulation, etc before either) so we got help from a friend and my hubby’s brothers. Installing the sheetrock would have been easier if we have replaced all the old outlet, switch and light boxes. They all have flanges (or a thick strip of metal for the light boxes) nailed onto the front of the studs. The sheetrock bubbled up over those areas. It’s not too bad on the walls but much worse on the ceiling. We ended up digging those sections of drywall out of the ceiling.

Mud and tape is slower than we expected. The joint compound took a long time to dry. We were also clueless about how to drywall around the window. After the drywall was installed aligned with the edge of the vinyl window, I just couldn’t stop thinking how we can trim the window later. We bought an oscillating saw intended for drywall but all the guys used the drywall knives. I used the saw to carefully cut off about an inch of drywall from around the window and then installed strips of wood. I hope the extra hours of labor were worth it down the road.