My hubby and I are planning a kitchen remodel. The kitchen in our 1947 home has the original cabinets which are sort of built-in but with rather low craftsmanship.

When we first moved in almost 5 years ago, a wall cabinet had a pair of doors with straight sections cut out of them and the bottom shelf had a large and irregular shape cutout covered by a piece of wood on top. We speculated that the cabinet was cut to accommodate a large microwave when the technology first became available to consumers. We traced the shelf cutout onto the piece of wood that was covering it, cut the wood, and attached it to what’s left of the cabinet with several straight metal connectors. I then covered all the cabinets with plastic shelf liner so the big flaw of this wall cabinet is no longer too visible and it functions like its old self.

While installing the shelf liner, I discovered that the base cabinets were attached to the walls without any wood in the back. What I mean is that the back of cabinets are the plaster walls with the sandy textures exposed and no paint. The sand is falling off constantly. Installing the shelf liner was a nightmare. The sand is also problematic for storing pots and pans. Who wants sand (or whatever it is) in their food? The solution was installing $200 worth of chrome kitchen organizers.

There were more problems with the base cabinets. The insides are all unfinished wood. Constant use of the drawers would drop wood dust onto the cabinet shelves below. We remedied this problem with 1/8″ hardboard nailed to the support frame of the drawers. I also added duct tape to the locations where two boards meet each other to keep the dust from falling through the cracks.

Aside from the problems with the cabinets, there was a leak under the sink from the pipes connecting to the dishwasher. The previous owner did not fix it although it was in the inspection report. A container was catching the slow drip when we got the keys to the house. I have done a few minor plumbing repair in the past but what’s underneath our sink is way out of the ordinary. I called up my expert (dad) and problem solved.

Well, can you tell this kitchen is dysfunctional from the start? People have lived in this house before us so they must have made it work for them except they didn’t have the luxury of the dishwasher which was brand new when we bought the house. 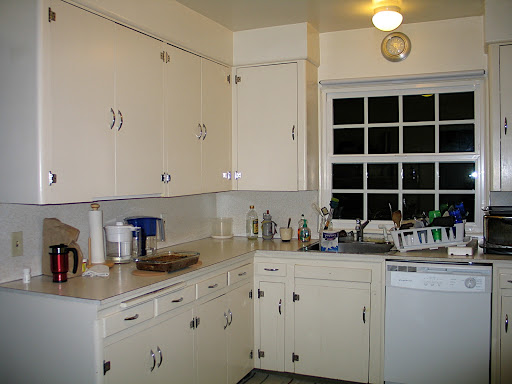 After all the initial work of patching around the cabinets, we were no longer motivated to do anything more to the kitchen until last fall. The lone wall that has no cabinets had some sort of a tiny corner shelf. The shelf was probably just big enough for a small TV. The shelf created an obstacle to make the space functional. We decided to remove it and install IKEA shelves. It sounds simple but the fix was more involving than first thought.

The corner shelf was bolted to the wall. It was a pain to remove it and patch the holes on the walls. The walls were covered by light yellow wall paper. I just covered the patched areas with plastic shelf liner. Installing the IKEA Antonius system would have been easier if we can find the studs in the walls. Plaster walls made it very difficult. I used toggle bolts in the past but most toggles are often sold with round head screws. Flat head screws are needed so they would set flush along the shelf tracks. The local hardware store came to the rescue as they sell toggles and screws individually. 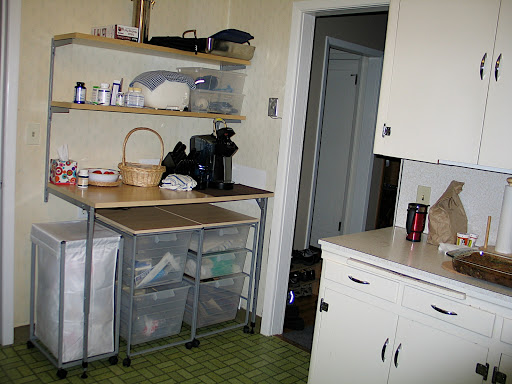 All in all, most of the small projects in the house turned into a rather big deal. When I talked to the neighbor recently, she thought our house never had a kitchen remodel while hers was done 15 years ago. I am going to be so happy when I get to beat up the cabinets during the demolition.